Publications & Media Manager Shannon Loys sat down with our very own Jen Taylor, currently playing Elizabeth Bennet in Pride and Prejudice. Jen has adapted two novels for Book-It and was most recently on our stage in Truth Like the Sun.

Shannon Loys: So is it fair to say you love Jane Austen?

S: How far back does this love go?

J: I probably didn’t fall in love with Jane Austen until college, but I read Pride and Prejudice when I was 8.

J: And I underlined all of the words that I didn’t understand and looked them up which took a very long time. (Laughs) I remember the word that struck me the most was “countenance.” Because it’s not a word that we use, and the concept of someone’s countenance was very confusing to me. I was like, “Well is it what they look like? No, is it their mood? Is it, you know, a cross between those things?” Yeah. I was very fascinated by that. Interestingly enough, I think I say “countenance” 45 times in this play.

S: 8-year-old Jen underlining words in Pride and Prejudice. I mean, you were an adapter in the making.

J: (Laughs) My mother would love to hear that. I think it was mainly because my mother loved the book. People: read books to your children. My mother was, and is to this day, an avid reader. She was interested in it so I thought, “This must be good.” And she watched the BBC production so I watched it, too. I wondered why Elizabeth didn’t end up with Wickham, frankly. Which is probably why I married my first Wickham. [Colin Byrne played Wickham in our 2004 production of Pride and Prejudice.]

S: I hear there’s a story about the necklace you’re wearing on the poster and in the show.

J: Yeah. The necklace that I’m wearing is a replica of the one that Jane Austen wore, that my parents gave me for a birthday, I think.

J: So nerdy. Right? The nerdiest thing you’ve ever heard.

S: I would imagine that most people in the audience—unless they know you and your history with Book-It—would assume that you’re just an actress who happens to be in an Austen play. They wouldn’t know that you, in your real life, have this special relationship with the material.

J: Yeah, so [Co-Artistic Director] Jane Jones loves this story: ten years ago I lost everything I owned in a burglary, where I was moving and they stole my moving van. I went to the mall because I needed to buy the staples and I was so overwhelmed by all of the consumerism, and how much stuff–I didn’t have anything–and I just thought, “What am I going to do?” I got a little freaked out and I went to the book store and bought Pride and Prejudice. I went back to where I was staying and just sat there and read it. I needed comfort.

S: Is Pride and Prejudice your favorite Austen novel?

J: You know, I’d say that Persuasion is my favorite Jane Austen novel.

S: And what have you adapted for Book-It?

J: I adapted Persuasion and Sense and Sensibility.

S: And this is the second time you’ve played Elizabeth?

S: The third time! Excuse me.

J: Yeah, I did it in Portland too, at Portland Center Stage.

S: Playing her every single night, is there anything new to discover?

J: Yes, of course! Every second is new. You know, there are moments when you’re rehearsing that, sadly, you gloss over, but then there are all sorts of times when you are onstage and you’re having a conversation with somebody and you’re thinking “Oh god, this is where I am in this moment. I just finally figured this out.” And especially with a completely different cast who’s interpreting things in a different way and a different director. Absolutely, yeah. It’s a new ballgame with a very familiar frame. (Thinks) I’m in a familiar stadium but I’m playing a different game. 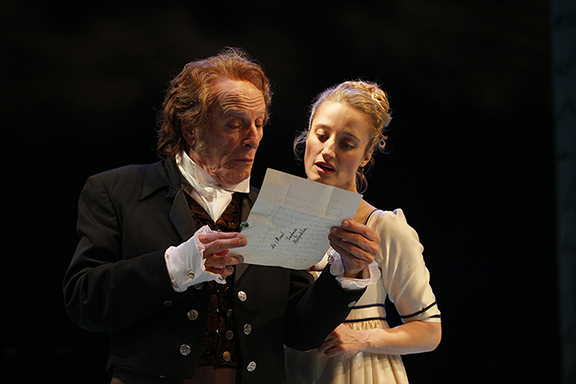 S: Elizabeth must rank in the top 5 most-beloved literary heroines. What is it about her?

J: She’s smarter than hell. She’s flawed. She is so witty and clever and good with language that she says all of the things that you wish you could say when you’re encountered with these things, right?

She’s kind-hearted. So she’s trying to be good to people, even though she can be a stinker.

She says all the things you wish you could say. I leave here sometimes going, “God I wish I could just have her sitting in my brain for those moments.”

S: To have those words when you need them. I mean, anyone can think of the right words later.

J: Right. She’s got them. They’re all right there. She’s so… wonderful. 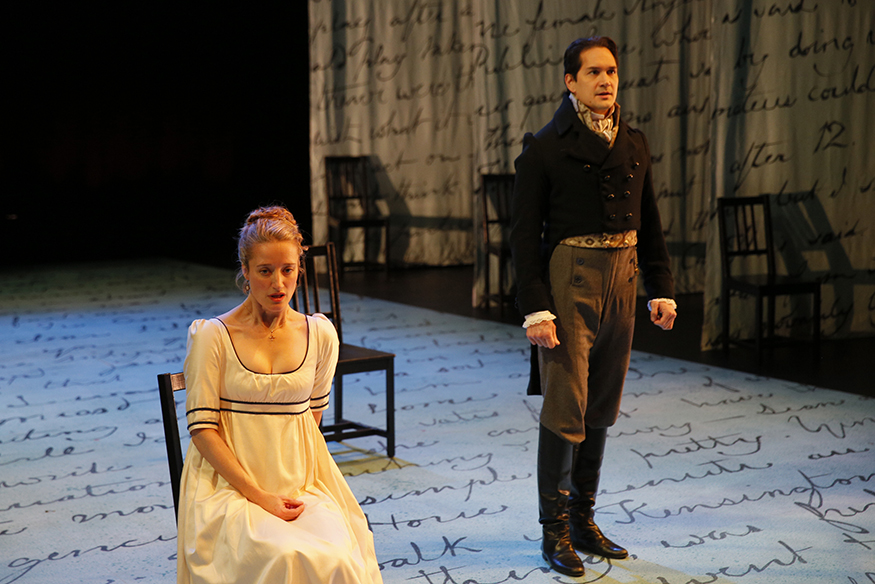 S: What is your favorite Elizabeth “zinger” that you deliver on stage?

J: “From the very beginning, from the first moment of my acquaintance with you, your manners impressing me with the fullest belief of your arrogance, your conceit, and your selfish disdain of others were such as to form that groundwork of disapproval on which succeeding events have built a now immovable dislike. Indeed I had not known you a month before I felt you were the last man in the world whom I could ever be prevailed upon to marry!”

S: You got married fairly recently, in the last year or so, to your “first Wickham?”

S: Was a mutual love of Austen a prerequisite for dating?

J: (Laughs) You know it’s funny, Austen brought me my husband—Jane Austen and Jane Jones. I met Colin doing Pride and Prejudice. And we were just friends for a long time, and then three and a half years later we adapted Persuasion together.

J: And we fell in love adapting Persuasion. So thank you, Jane Austen for–

S: (Laughs) For everything!

S: You played Elizabeth before you tried adapting. How did you get started doing that?

J: I’ve always wanted to write a book but I don’t even know how to start that, and I didn’t feel like I had enough inspiration to write a play. So I was talking to Jane about, you know, telling different Austen stories and she said “Well, why don’t you just try doing one?” And I thought, “Oh! Oo. Yeah. Uh, ok! …Wow, I don’t even know how I would go about doing that.” And she said, “Well, get Colin to help you.” Because he’d adapted short stories before. And frankly, what I did was I downloaded the book onto my computer and then I went through and just started cutting. So most of the language is directly from the novel because I took it right off the page.

Something [Book-It Company Member] David Quicksall had said to me very early on was “Find the story within the story that you want to tell.”

S: Because there’s so much in a book.

J: Because there’s so much and you can’t do it all, so find the thing that you want to focus on and tell the story that you want to tell. And figuring out what your point of view is, is important too.

And I fumbled around for awhile, trying to figure it out.

S: Was it weird being on the other side of it, hearing actors speak your adaptation?

J: No, it’s fantastic. I love it. I mean, I love doing Book-It shows for that reason. I love to be a part of that process. Sometimes I get a little too excited about it, um, cause I like playing with words. It’s fun.

S: Are you the in-cast Austen expert for this show?

J: Oh god, I’m probably the bossy—the, the “Bausten.” Emma, who is our assistant stage manager, is also very well versed in Austen. So we together are sort of the nerds of the group. I don’t know if they would call me—what was it you said?

J: Yeah, I think they’d call me the nerd. Not the expert but the nerd.

S: Well, I hear affection there.