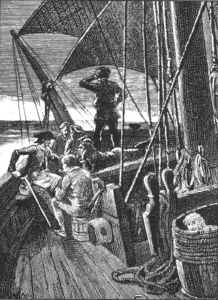 Piracy itself can be traced from ancient Greece through Rome and the Vikings. However, for our purposes, it makes sense to join the narrative a bit closer to the time in question: with the advent of the Buccaneers in the late 16th century. The word refers to a group of 500-600 mostly French hunters who hunted cattle on Hispaniola (coincidence?) for profit. The Spanish hated them and were determined to drive them out, eventually succeeding in driving them from Hispaniola to Tortuga, where they eked out a living attacking local ship traffic and reselling the captured wares. They were known for being highly practical and democratic, as well as being excellent marksmen and brilliant tacticians. As they expanded their reach into deeper waters, the word ‘Buccaneer’ soon became synonymous with the swashbuckling brand of Atlantic ocean piracy that is so recognizable today.

This is obviously not the beginning of piracy, or even northern European piracy. In fact, the word appears in the English law as early as the early sixteenth century, when the first legal definition of piracy came onto the books (see upcoming section: Pirates and Pirate Law). However, this is the ancestry of the type of piracy that is so clearly depicted in Treasure Island.

Privateering also had a major influence on early piracy. Officially sponsored pirates, known as privateers, would be given ‘letters of marque’ by whichever government they worked for. These letters would allow them to legally attack and plunder ships belonging to rival nations. These were not always low-life pirates, though; Sir Francis Drake, for example, was operating as a privateer when he made his voyage around the world between 1577 and 1580.

In 1603, King James I actually made it illegal for English sailors to work on foreign ships. While for the most part these sailors became crewmen on merchant ships or sailors in the Navy, some were unsatisfied with the wages afforded by those positions and gradually became pirates instead. By 1720, around 2000 pirates were preying on the ships and towns around the Atlantic. This period – 1650-1720 – is now widely regarded as the golden age of piracy.

Piracy began to drop off in the 1720s, with governments cracking down in order to protect their shipping interests. Due to this vigilance, as well as the increase in naval patrols of the colonies, the number of pirates operating in the Atlantic was reduced to around 200 by 1726. However, piracy did continue, and the threat of pirate attack would have still been truly real in Robert Louis Stevenson’s time. In fact, letters of marque were even issued by the Confederate States of America during the Civil War.

Piracy has never truly gone away. For example, the 21st century rise of piracy off the coast of Somalia has garnered international media attention. There is also a long history of media representation of piracy, which has never quite allowed iconic pirate imagery to die. Piracy and its legacy shows no sign of ending any time soon.