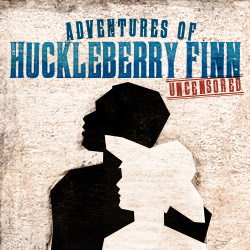 Huck Finn is an iconic fixture in America’s literary canon, and with Twain’s nuanced depiction of escaped slave Jim as a fully realized human, the novel presented a moral awakening for readers in 1885.

Why “Uncensored?”
Book-It has a goal of honoring an author’s intent and narrative. Huck Finn has traditionally been censored in language and content, and we want to let our audiences in the greater community know that the novel will be performed as written.

Huck Finn: Uncensored in New Production by Book-It
Drama in the Hood, 4/21/13

Huck Finn Drifts Down the Mississippi and onto the Book It Stage
Poshy Magazine, 4/29/13

Can’t see the above player? Click here to open publication.

Book-It teamed up with nationally renowned Twain scholars, Central District Forum, the Northwest African American Museum, and Seattle educators to discuss the controversy of Twain’s acclaimed novel and issues of race in America.