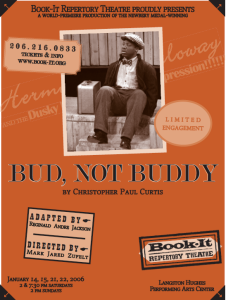 ]This beloved book, a favorite of teachers, parents, and kids alike, tells the story of a 10-year-old orphan who runs away from a mercenary foster home in order to find the father he’s never known. Armed with a tattered suitcase, a made-up set of “RULES AND THINGS” and a handful of Big Band flyers, Bud sets off on a remarkable journey of discovery. Please join us as we hit the road with Bud, traveling from small-town libraries to ramshackle Hoovervilles to swanky nightclubs filled with adventure and answers.