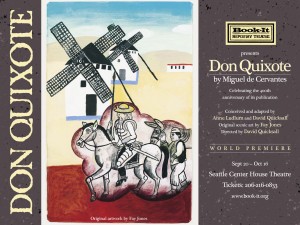 Along with being widely regarded as the world’s first modern novel, Cervantes’ Don Quixote is also a loving – and brilliantly funny – tribute to both the power of literature and the joy of the imagination.  Book-It marked the 400th anniversary of Spain’s most memorable son with a special stage adaptation of Don Quixote. Inspired by the era’s great tales of chivalry, the noble knight-errant Don Quixote de la Mancha sets out upon his mighty steed, Rocinante, to right wrongs and protect the have-nots of 16th-century Spain. Although his adventures are often fantastic in nature, the book’s enduring appeal is very real indeed. Hilarious, heartwarming and utterly charming, don’t miss this grand tribute to the dreamer within us all.