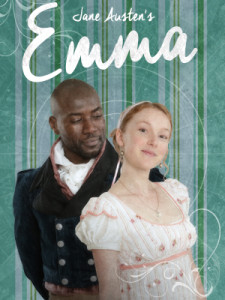 Young and privileged, Emma Woodhouse has the world on a string. But when she begins playing matchmaker to her friends and neighbors in Highbury, she learns the hard way that when it comes to love she hasn’t got a clue.

Jane Austen wrote Emma in 1815 and Book-It is thrilled to celebrate this special anniversary and the holidays Regency England-style.

Below is a Study Guide for Emma that we hope will enhance your experience of the production.

Stitch & Bitch – a FREE embroidery/gossip fest in the Center Theatre lobby. Bring your own or lean on us for advice and supplies. RSVP here.
See the show that evening, too. Get your tickets here.
December 9, 6:30pm

A Jane Austen Birthday Celebration – make a wish, eat a cupcake, sip champagne, and play a parlor game Regency style. $8 covers the party. Make it an evening and see the show that night, too.
December 16, 6:30pm