I Am of Ireland: A Celebration in Story, Song, and Dance 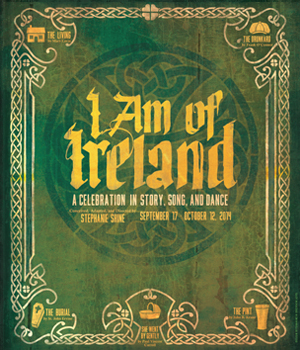 From the repertory: A reprise of one of Book-It’s first runaway hits, originally produced in 1994

At once heart-breaking, side-splitting, and life-affirming, Book-It is proud to revive this Irish culture favorite. Through an evening of traditional song, dance, and short stories—including Frank O’Connor’s The Drunkard and Mary Lavin’s The Living—this Emerald Isle gem is a testament to the human spirit, and will have you hoisting a pint to all things Irish! Original adapter/director Stephanie Shine returns to Seattle to helm the production.

The Burial, by St. John Ervine
As John Mawhinney, James O’Hara, and John McClurg wait for a funeral procession to begin, they share their condolences for the girl who died, and discuss the pressing matter of a heifer for sale.

The Drunkard, by Frank O’Connor
Father’s headed to another funeral and that means drink. Larry’s in charge of keeping his father in line, but how can he keep Father from his pint? Maybe if he takes a sip himself…

She Went by Gently, by Paul Vincent Carroll
A knock in the middle of the night wakes midwife Maura and her son. They set off for an early morning birth complete with goats and tears.

The Living, by Mary Lavin
Mickser has seen many corpses, but Dougald’s seen none. The two boys set off to remedy the problem on an adventure that explores the living and the dead.

The Pint, by John B. Keane
A publican demonstrates how to best pour—and enjoy—the perfect pint.

Book-It’s I AM OF IRELAND Shares a Bit of Irish Heart
Broadway World, 9/25/14