Our scripts have been wrought with care from the original works, always honoring authorial intent. These highly theatrical, vibrant works thrill audiences and are perfect for all kinds of producers from academic theatre to community theatre to professional companies. 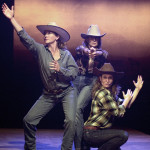 Cowboys Are My Weakness
by Pam Houston, adapted by Myra Platt

This adaptation crackles with Pam Houston’s hilarious tales about a set of smart and feisty women and their search for love and adventure in the “new” Old West. Experience an adaptation that The Seattle Times called “an engaging pitch-perfect realization” of Houston’s bestselling collection.
3 women, 3 men, 2 musicians – 25+ characters 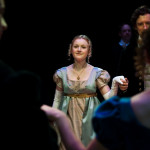 Jane Austen’s fourth novel is a sparkling comedy of 19th-century manners centering on the well-intentioned Emma and her sometimes indiscreet, often misapplied, and always entertaining efforts as matchmaker. Witty, intelligent, and spoiled, Emma takes it upon herself to arrange a suitable marriage for her poor friend Harriet. But despite her advantages, she is oblivious to the true nature of almost everyone around her—including herself—until at last she happily loses her own heart.
6 men, 8 women – 17+ characters

“Emma‘s script…allows nearly all of Jane Austen’s clever, sparkling gems to be on display.” – AustenBlog 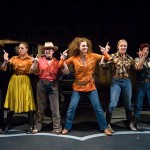 Even Cowgirls Get the Blues
by Tom Robbins, adapted by Jennifer Sue Johnson

This sexy, metaphorical romp by Tom Robbins was a late-’70s counterculture favorite. Spiritual, goofy, political, and poetic, Robbins’ brilliant intellectual plots lead us one way, followed fast by a twisting curveball. Heroine Sissy Hankshaw’s unusually large thumbs point her toward her physiological destiny: she becomes an underground hitchhiking legend. At the end of the road, FBI agents, whooping cranes, and the eponymous cowgirls collide in the story’s climax at the Rubber Rose Ranch.
3 men, 10 women – 22+ characters

“It’s out of the ballpark, never less than outrageously entertain­ing while remaining extremely faith­ful to the anarchic spirit of the original book.” – Michael Dare, Dareland Blog 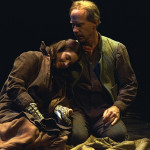 Set in the cold embrace of a New England winter, Ethan Frome explores the dark and powerful landscape of a failed marriage, a fledgling love, and the heartbreaking consequences of a life only half lived. Bound in marriage to a bitter invalid, the taciturn, intelligent Ethan Frome falls in love with his wife’s cousin, vibrant young Mattie Silver. Torn between duty and desire, Ethan and Mattie succumb to a kind of spontaneous joy neither had ever known, stealing a brief glimpse of happiness before fate intervenes.
4 men, 3 women – 12 characters

“The nearly primal love triangle of Ethan Frome is still riveting today, partly because social conventions still keep us from being ‘free.’” – The Stranger 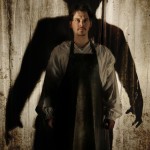 Frankenstein; or, the Modern Prometheus
by Mary Shelley, adapted by David Quicksall

“David Quicksall’s assured adaptation can exert a viselike grip on your senses, stir your intellect and emotions, and, in its chill-inducing design and fidelity to Shelley’s most artful prose, get pretty spooky.” –The Seattle Times 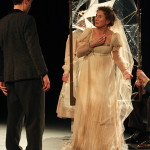 An epic literary journey, Great Expectations follows the fickle turns in the life of its orphaned hero, Pip. The future looks dim at age seven, when the story begins, as Pip meets an escaped convict and suffers the tyrannous upbringing of his sister, Mrs. Joe. With an innocent heart and a surprising inheritance, Pip is able to avoid his future as a blacksmith, and instead begin an ambitious rise through the rigid social ranks. An unforgettable cast of characters surrounds Pip as he travels, struggles, and falls in love. Great Expectations is a story of ambition and the possibility of progress within even the most dreadful, 19th-century circumstances.
7 men, 2 women – 14+ characters

“But the real star is the script, as it should be. Rather than straight dialogue, the characters narrate themselves.” – Willamette Week 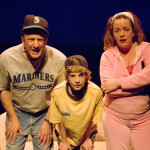 It’s summer and Miles O’Malley, our 13-year-old, four-foot eight-inch, stature-challenged hero, is deeply involved with two things: the Puget Sound and growing up. Many changes are afoot in this young man’s life; the Nisqually Earthquake is about to shake things up in his hometown of Olympia, Washington, and his growing infatuation with the girl next door, Angie the baby sitter, surprises and confuses him. His obsession with all things aquatic leads him to make an exciting discovery and attracts fame and attention that he neither expects nor desires. Poetic, yet lean and lucid, and disarmingly funny, The Highest Tide is an ingenuous look into the change of adolescence, and an intelligent, fascinating peek under the coastal waters of the Puget Sound.
8 men, 10 women – 37+ characters 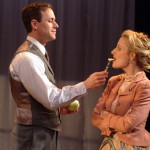 The House of Mirth
by Edith Wharton, adapted by Marcus Goodwin

Lily Bart, the lovely, impoverished and stubbornly single heroine of Edith Wharton’s 1905 dark bestseller The House of Mirth, is a character destined for disappointment. Trapped in a society where women are “brought up to be ornamental,” she’s torn between her desire for a carefree, gilded existence and her desire for the unthinkable: a marriage based on love. And unfortunately, at age 29 in her world time to make such a decision is running out.
6 men, 9 women – 32+ characters

“Book-It’s The House of Mirth is an emotional rollercoaster that dives deep into the human mind. Wharton’s tragic tale is filled with unavoidable obstacles that still exist one hundred years later.”– BroadwayWorld.com 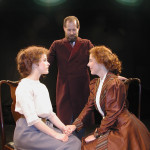 “The interpersonal end of Howards End so engages, the wider implications can be missed. But they exist, in the novel and Book-It’s sensitive treatment.” – The Seattle Times 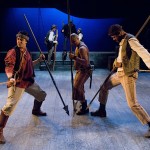 Moby Dick, or The Whale
by Herman Melville, adapted by David Quicksall

One of the most famous first lines in literature, “Call me Ishmael,” begins this fabled sea-going adventure. Hear the muscular dialogue and rich narrative of Melville’s great story of Captain Ahab in his determined and perilous pursuit of a fearsome white whale. More than just a sea voyage of a captain and his crew, Melville’s tale dives deep beyond the void of the open sea, exposing to us the deeper mysteries of life.
10-14 men – 18+ characters

“…a fine example of what Book-It does best; moving literature from the page to the stage while emphasizing the strengths of both forms, and compromising neither…. We feel the wind and the power of the tempest in our souls, which is precisely where Melville wants it to exist.” Jerry Kraft, seattleactor.com 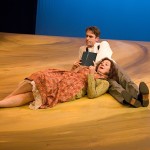 My Ántonia
by Willa Cather, adapted by Annie Lareau

Willa Cather paints her pioneer country in wistful sepia prose that has become an enchanting American classic. The childhood memories of narrator Jim Burden in Blackhawk, Nebraska are woven together with the struggles of his beloved neighbor, a newly-arrived immigrant girl from Bohemia, Ántonia Shimerda. The story of their friendship outlines the determination, hardship, and resilience of Great Plains life at the turn of the last century.
9 men, 9 women – 35+ characters

“Like the Great Plains of Nebraska it celebrates, Book-It Repertory’s adaptation of My Ántonia runs solid and wide, inspiring in its fine detail.” – Seattle Post-Intelligencer 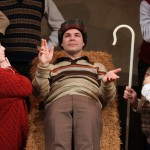 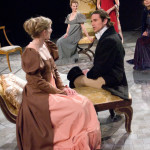 A romantic tale of love, perseverance, and rejuvenation, Persuasion pits desire against convention, cutting to the heart of the social and gender issues of early-19th-century England. Eight years after Anne Elliot’s painful rejection of the naval officer she was betrothed to, convinced of his “unworthiness” by her family, she once again struggles with her rekindled and unwavering devotion. Austen’s scenes of avarice and poverty, flirtations begun and abandoned, and her ability to be a ruthless narrator, all come to life in this insightful new adaptation.
6 men, 8 women – 21+ characters 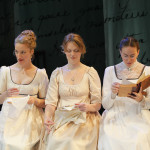 Pride and Prejudice
by Jane Austen, adapted by Marcus Goodwin

Pride and Prejudice is the story of the Bennet family (particularly the five unmarried Bennet daughters) and the society in which they live. Full of wit and keen observation, the story also boasts a cast of unforgettable characters: the dashing – and prideful – Mister Darcy, the monstrously self-centered Lady Catherine de Bourgh, the unctuous Reverend Collins, and of course, the extraordinary Elizabeth Bennet.
7 men, 8 women – 26+ characters 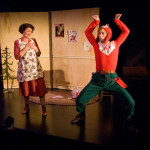 It’s hard to imagine that a nine-year-old could be jaded about a particular December holiday, but Red (a.k.a. The Red Ranger of Mars, Protector of the 23rd Century) is positively peevish! All would be well if only he could get his “Official Buck Tweed Two-Speed Crime-Stopper Star-Hopper Bicycle!” Berkeley Breathed’s “guaranteed true Christmas story” shows us that a little magic, a lot of imagination, and just the right amount of faith can make a believer out of anyone.
8 men, 7 women – 20+ characters

“This musical adaptation has tunes you can actually hum on your way home… Red Ranger Came Calling is a funny, affecting treat for young and old.” – The Seattle Times 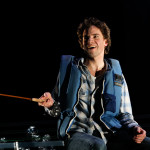 The River Why
by David James Duncan, adapted by Myra Platt

Gus Orviston, the spawn of an erudite fly-fisher and a country plunker, is a true fishing prodigy from an early age. He makes an hysterically funny, yet perceptive and moving journey of self-discovery. Set in the Pacific Northwest, audiences will at once feel kinship with Gus as he leaves his quirky, fishing-obsessed family in the suburbs to search for happiness on the banks of a wild and remote Oregon river. Gus’s quest for perfecting “the ideal schedule” yields to a pursuit of why and like fishing, the pursuit itself is where meaning lies.
7 men, 4 women – 20+ characters

“…a charmer, with a sense of whimsy in the vein of Richard Brautigan and other literary, nature-loving West Coasters.” – The Seattle Times 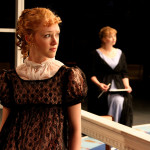 In this vivid new adaptation of Jane Austen’s first published novel, we meet the Dashwood sisters, whose happy lives are dramatically changed in the wake of their father’s death. Their home is taken by their half-brother and his overbearing wife and they must learn to live on much less far away from all they’re accustomed to. Amid their misfortune, love alights: the very sensible Elinor falls for the equally cautious Edward Ferrars, while the flighty sensibilities of Marianne flutter ill-advisedly to their handsome, reckless neighbor John Willoughby. Both hard lessons and gentle guidance help them learn that happiness in love is an unpredictable struggle against the most important social values: family, honor, and wealth. Luckily, with Jane Austen love wins.
6 men, 8 women – 18+ characters

“All that one might wish for in the Austen drawing rooms of one’s imagination…Book-It’s Sense and Sensibility is a flirty delight.” – The Seattle Times

“Book-It Repertory Theatre’s new adaptation gives audiences the chance to fall for Sense and Sensibility all over again.” – Seattle Met 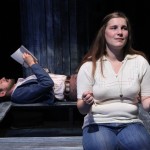 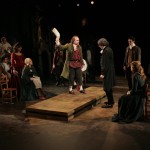 A Tale of Two Cities
by Charles Dickens, adapted by Kevin McKeon and Jane Jones
A sweeping story of love, courage, and redemption, A Tale of Two Cities is woven around a multitude of unforgettable characters – the bloodthirsty Madame Defarge; the brave Lucie Manette; and the ne’er-do-well, noble Sydney Carton. Set in and around the French Revolution, it chronicles the lives of characters in France who become instigators of the revolt, and their counterparts in England who become unintentional participants. As they struggle to remain true to their beliefs amid the chaos of the revolution, their lives change forever.
11 men, 8 women – 60+ characters

“The adaptation by Jane Jones and Kevin McKeon is impressively literate and never bookish, passionate in its fidelity to the politics and personalities of the original and smart in its pure theatricality.” –Aisle Say Seattle