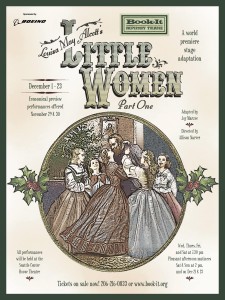 In 2005, Book-It celebrated Christmas with one of literature’s most famous families – Meg, Jo, Beth and Amy March. Recognized as one of the best-loved children’s classics of all time, Louisa May Alcott’s Little Women is also rich with adult themes – at its heart lies a family beset by poverty and a nation gripped by war. Loosely based on Alcott’s own childhood during the Civil War, the story follows four very different sisters as they grapple with the demands of running a household while their father is away at war. Book-It’s staged version presented the book as Alcott originally wrote it. (Alcott was asked to write a second part, which begins three years after their father returns from the war)