Moby-Dick, or The Whale 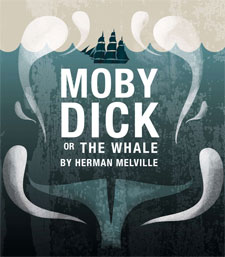 by Hermin Melville
Adapted and Directed by David Quicksall

One of the most famous first lines in literature, “Call me Ishmael,” begins this fabled sea-going adventure. Hear the muscular dialogue and rich narrative of Melville’s great story of Captain Ahab in his determined and perilous pursuit of a fearsome white whale. More than just a sea voyage of a captain and his crew, Melville’s tale dives deep beyond the void of the open sea, exposing to us the deeper mysteries of life.

“This production is a fine example of what Book-It does best; moving literature from the page to the stage while emphasizing the strengths of both forms, and compromising neither…. We feel the wind and the power of the tempest in our souls, which is precisely where Melville wants it to exist.”
Jerry Kraft, seattleactor.com

Theater: ‘Moby’ and ‘Madeline’ reach for the stars
Seattle Post-Intelligencer, 2/16/09