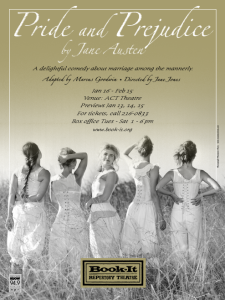 Our first foray into adapting the novels of Miss Jane Austen, P&P is replete with the author’s charm, wit, and keen observations. Her comedy of manners and courtship boasts a cast of beloved and unforgettable characters led by the extraordinary Elizabeth Bennet and the dashing Mister Darcy. Book-It is delighted to once again stage the classic favorite for new and returning audiences this holiday season.