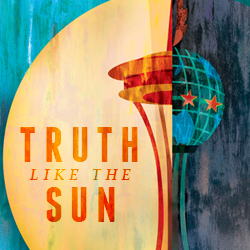 Book-It is thrilled to produce the latest of local author Jim Lynch’s three novels. Roger Morgan was a smooth-talking young promoter who built Seattle’s most famous icon for the 1962 fair. Thirty-nine years later in the shadow of his Space Needle, the Seattle raconteur is a mayoral candidate dogged by a determined young reporter looking for long-buried dirt. “Enveloping and propulsive,” Lynch’s latest novel aims a light at the extraordinary events that put Seattle on the map.

Seattle Takes the Spotlight in Book-It’s Truth Like the Sun
Drama in the Hood, 4/29/14

Six Shows Left for Book-Its’ Truth Like the Sun
Heed the Hedonist, 5/13/14

EVENTS
Director Jane Jones describes Truth like the Sun as a “love letter to Seattle,” and we definitely agree with her. So what better way to celebrate our wonderful city than by highlighting its history and our favorite local businesses?

Join us for one of our exciting pre-show events, and learn something new about our hometown:

[quote]April 30: Seattle Center Past, Present, and Future
Join Tracy Robinson, executive director of the Seattle Center Foundation, and a panel of experts as they discuss the impact Seattle Center had on the city when it was built, and how that impact will continue in years to come.

May 2: Tasting with Schilling Cider
Come discover the latest craze to hit Seattle’s top bars: craft cider. Schilling Cider will be on hand to teach you everything you need to know, and why cider may just be your new favorite drink.

May 9: Tasting with Hilliard’s Beer
Hilliard’s has only been around for a few years, but they’re already one of the hottest beers in Seattle’s famous craft scene. Come find out what sets them apart. (Hint: It’s not their IPA; they’ve vowed never to brew one!)

May 16: Tasting with Bookwalter Winery
Believe it or not, we found a winery that’s as literature-crazy as we are! Bookwalter will be sampling some of their finest literary vintages, including Subplot, Foreshadow, and Suspense.