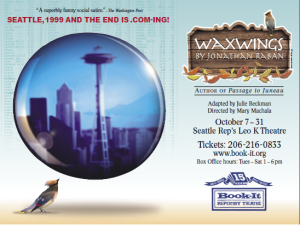 Set in a dotcom-frenzied Seattle, Jonathan Raban’s Waxwings is a hugely entertaining satire on the American dream, as envisioned through the eyes of a Hungarian-born British expatriate professor and a charismatic Chinese immigrant. The author of 10 books and recipient of numerous awards (including the National Book Critics Circle Award and the PEN/West Creative Nonfiction Award), Raban has lived in Seattle for the past 14 years. Kirkus Reviews calls Waxwings “one of the best accounts ever written of an American era”; The Washington Post calls it “both a comedy of manners and a superbly funny social satire.”