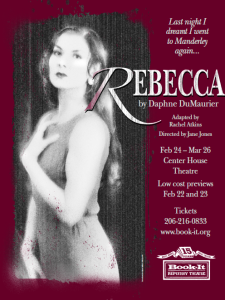 “Last night I dreamt I went to Manderley again …” So begins Daphne de Maurier’s unforgettable tale of love, marriage and … dare we say murder?  When a shy young woman becomes the second wife of a wealthy Englishman, she becomes inexorably drawn into the life of the beautiful and charismatic Rebecca, the first Mrs. De Winter, who still haunts the halls and dark hearts of Manderley. From the author of the classic short stories The Birds and Don’t Look Now.

Book-It takes its turn with the mysterious ‘Rebecca’