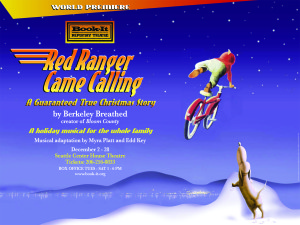 Based on the popular illustrated book by Berkeley Breathed (of “Bloom County” and “Opus” fame), the story is set on Vashon Island during the Depression, and is based on a true story told to the author by his father. According to Breathed, his father (who at age 9, insisted on being addressed as the Red Ranger of Mars) was shuttled off to Vashon to spend Christmas 1939 with his Aunt Vy. During the visit, Red went calling on a reclusive neighbor known as Saunder Clos, rumored to be none other than a retired Santa Claus. Years later (in 1994), Breathed published Red Ranger Came Calling, an illustrated children’s book based on that fateful Christmas encounter.