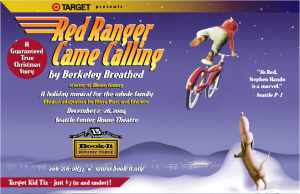 It’s hard to imagine that a nine-year-old could be jaded about a particular December holiday, but Red (a.k.a. The Red Ranger of Mars, Protector of the 23rd Century) is positively peevish! All would be well if only he could get his “Official Buck Tweed Two-Speed Crime-Stopper Star-Hopper Bicycle!” Berkeley Breathed’s “guaranteed true Christmas story” shows us that a little magic, a lot of imagination, and just the right amount of faith can make a believer out of anyone.