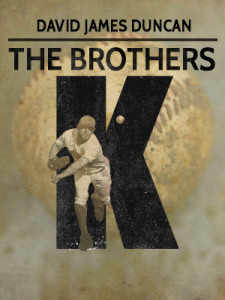 by David James Duncan
Adapted and directed by Myra Platt

“This will be one of those shows that everyone is talking about for years to come and if you miss out, well, you were warned.” — BroadwayWorld.com

From the celebrated author of The River Why (Book-It, 2010), comes an uplifting tale that spans the middle decades of the 20th century. Through the eyes of the brothers of the title, Duncan examines the lives of the Chance family in Camas, Washington through the interplay of faith and spirituality, war and politics, family, baseball, and love. Book-It is pleased to present The Brothers K in a two-part, epic telling.

“‘The Brothers K’ Is The Great American Novel You Haven’t Read Yet. Love, war, and baseball.” —buzzfeed.com

“Love, War and Baseball” What’s not to like! –KCLS Blog

Family, Religion and Baseball in Book-It’s THE BROTHERS K, PART ONE –BroadwayWorld.com

Book-It’s Beautifully Touching THE BROTHERS K, PART TWO is a Must See –BroadwayWorld.com

Make it a Double Header! See the full show in one day – several options are available from May 21 through June 26.

What To Do During the Break

There are several restaurants around the Seattle Center, grab a drink and dinner before Part II begins. There are Book-It VIP cards at the Box Office that offer discounts to several nearby businesses.

At the EMP Museum,  show your Book-It ticket stub and get $5 off your EMP admission price. It’s a great place to spend some time between shows.

Where ever your break between shows may take you, don’t wander too far! Part II begins promptly at 7:30