The Cider House Rules, Part One: Here in St. Clouds 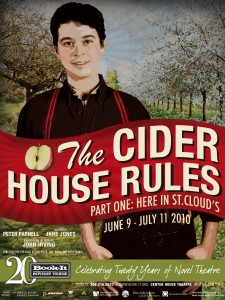 This is the story of orphan Homer Wells’ life in a Maine orphanage and his education under the tutelage of Dr. Larch, who delivers not only babies but their mothers, too.

The Cider House Rules was the first full-length novel adapted in the Book-It Style™. It premiered in 1996 at Seattle Repertory Theatre (with subsequent productions at the Mark Taper Forum in Los Angeles and at The Atlantic in New York). The groundbreaking production put Book-It—and our trademarked style—on the national theatre map and has a very special place in the company’s history.