The Financial Lives of the Poets 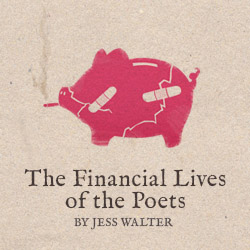 by Jess Walter
Adapted and Directed by Myra Platt

Matt Prior wakes up from his American Dream (writing a financial advice column in blank verse) with an overdrawn bank account, no job, his senile father a new fixture on his living room couch, a wife who is just about to run away with an internet fling, and a garage’s worth of knick-knacks from a failed e-bay business. About to lose his home, he finds himself behind a 7-Eleven with a pair of wannabe thugs and an idea that could solve all his problems.

“Walter offers a story as real as our own lives: a tale of overstretched accounts, misbegotten schemes, and domestic dreams deferred.”
–Amazon

Clever and Funny Dialog in Book-It’s FINANCIAL LIVES OF THE POETS
Broadway World, 6/13/13

A Poetic Journey from Fiscal Ebola to Narco Robin Hood.
Drama in the Hood, 6/14/13

“The Financial Lives of the Poets” produced by Book-It
Arts Stage Seattle Rage, 6/14/13

The Financial Lives of the Poets
Seattle Actor, 6/15/13

Don’t Miss: ‘The Financial Lives of the Poets’ at Jones Playhouse
Seattle Met, 6/19/13

The Financial Lives of the Poets on stage
NW Book Lovers, 6/26/13

Can’t see the above player? Click here to open publication