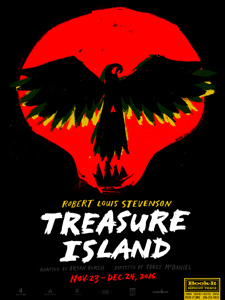 Beyond the Book
post-show experiences: Dec 4, 11

Full of enthralling characters and one of literature’s most beloved villains, Treasure Island explores the complex relationship between the morally ambiguous Long John Silver and the young Jim Hawkins. Throughout this thrilling tale, Hawkins learns hard lessons of balancing the lure of adventure with the desire for stability and confronting the dilemma of liking a person, but not their behavior. The most popular pirate story ever written in English, Treasure Island is sure to delight audiences this holiday season! Age Recommendation: 12+ for swashbuckling, gunshots, cannons, and extended fight scenes

PRESS
The Seattle Times says our production of Treasure Island “checks all the boxes for a good pirate story: colorful characters, plenty of action and a crackling Long John Silver.”

“The ensemble is absolutely top notch and each look to be having a blast as they get to play pirate making the childlike glee of the piece shine through.” – BroadwayWorld Seattle.

You’re invited to join us for two Beyond the Book post-play experiences. These events are free and open to the public. Start time is approximately 4:30pm.

Know Your Knots on Sunday, Dec 4
Learn about nautical knots and seamanship with this knot-tying demo and workshop.

Parrots and Pirates on Sunday, Dec 11
Debbie Goodrich, the Parrot Lady of Washington, offers an educational workshop about parrots with a chance to meet the parrots in the lobby.
Want to learn more? Our dramaturg lists her favorite books related to Treasure Island!

Sources on Ships:
Gordon Perry. “Knots”.
Stephen Howarth. “Historic Sail: The Glory of the Sailing Ship From the 13th to the 19th Century”.

Sources for Children and Young People:
Jason Porterfield. “Treasure Island and the Pirates of the 18th Century”.
John Hamilton. “Pirates in the Media”.

We’re hosting a food drive throughout the run of Treasure Island to benefit the Queen Anne Food Bank. Bring in a donation, and provide healthy food assistance to low-income and homeless people living in Seattle.

A TALE FOR THE TIME BEING >>