IN A TOWN CALLED CAMAS

When I first cracked open The Brothers K, I couldn’t believe my eyes. According to the words on page one, this 650-plus page epic was set in my hometown:

I lived in Camas between the ages of two and five. It’s a fairly small mill town in Southern Washington, right on the Columbia river. When I lived there it was surpassing 10,000 people for the first time. That’s why I was extra thrilled to be an assistant director and dramaturg on Book-It’s adaptation of this play, discovering every day that the novel’s setting is essential to the story. The story of the Chance family is intricately woven into the fabric of the small town I used to know. As you prepare to travel to Camas with us this May and June, allow a former Camas resident (Camasite?) to help you see how the facts and fictions of Camas are woven together in our upcoming epic.

Camas is a paper mill town through and through. The Georgia Pacific mill (formerly owned by Crown Zellerbach) sits at on the mouth of the Washougal River, where it feeds into the Columbia. The mill is directly adjacent to the few parallel streets that constitute downtown Camas. The mill has been the center of the local economy since the first mill opened in 1883 to provide paper for a newspaper across the state border, The Oregonian. In its time it has seen massive growth, five mergers, numerous strikes and union battles, and countless injuries. In 1969, closer to the end of the novel’s arc, the mill employed over 3,000 people.

For anyone living in Camas, the paper mill looms large. For a kid, doubly so. Early in The Brothers K, Kincaid, the narrator, and his father Hugh Chance sit in their car, waiting for Hugh’s friend to get off work. As they wait in their old Fortyford, Kade sits in awe of the mess of smokestacks and machinery, wondering how paper is made, wondering how his ex-baseball star father fits into that labyrinthine puzzle of a building. I too remember staring at the mill, wondering how anything works under the countless smokestacks pumping smoke into the air. The presence of the mill in Camas is always tangible, taking up as much land and air as it does, and on top of all that, there’s the smell.

Like any paper mill, the Camas plant casts a distinct sewery smell over the town of Camas. Smelly mills use a process that converts wood into a pulp made of pure cellulose fibers. Wood chips are treated with sodium hydroxide and sodium sulfide, breaking the bonds holding these fibers together. However, the sodium sulfide gives these chemical mills their nasty stench, creating a local aroma that all nearby residents simply have to get used to. It’s worth noting that Camas is only 20 miles east of Portland — upwind, of course.

I played baseball for the Mets. Not those Mets, mind you, but the Camas Mets, which was just one team of many in the Lacamas Little League. I was never any good, primarily because I lacked the baseball passion that drives the Chance brothers to play. And even though I played T-ball, being in the youngest division of the league, my batting average was still abysmal. But I did manage to look good posing: 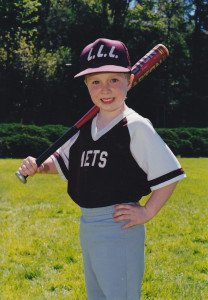 Baseball is the glue that holds that Chance brothers together in their first years coming of age in Camas. Their father Hugh was a minor league star who had a short brush with the Majors until a couple pitching injuries and a ballooning family size sent him back down to the minors. But a mill accident that crushes his pitching thumb dashes any remaining hopes he has of a baseball career. Because this accident happens when the boys are young, they live in the shadow of their Papa’s baseball successes. The older brothers can only remember pieces of his career, and Kincaid, the youngest brother, relies entirely on his brothers’ stories to understand his father’s glory days.

Camas has no baseball team, but its proximity to Portland precludes the need for a team of its own. Instead there’s the active Lacamas Little League (which I was a part of) and the local high school’s team, aptly named the Camas Papermakers. The Camas branch of the Little League is one of the largest youth sports groups in the area, first chartered in 1958 — just two years after our story begins, which means the Chance boys played in the same League I would about 40 years later. 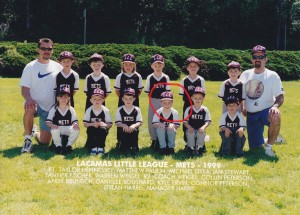 And next time you’re driving through Portland, maybe take a quick detour to Camas. For now, come join us in Camas in our production of The Brothers K. I suppose it’s a matter of beautiful chance that I ended up working on this play and revisit my memories as we rehearse. Camas may have grown up a bit, having almost doubled in size since I lived there, and quadrupled in size since the Chance family would have moved there, but many things in small towns never change. There’s still the river, still the lake, still the views of Mt. Hood, still the green streets, and still the paper mill that dominates it all.

Ian Stewart is an Artistic and Literary intern with Book-It Repertory Theatre and an assistant director on The Brothers K.