The Early Life of Sylvia Beach 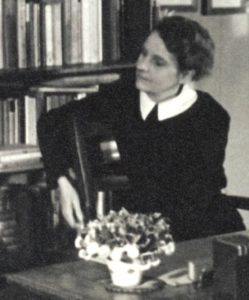 Sylvia Beach, bookseller, publisher, and artistic patron extraordinaire, was born on March 14, 1887 in Baltimore, Maryland. The second of three daughters, she was able to experience Paris as a young girl when her father moved the whole family there to work for the American Church. She would return to study French Literature at Sorbonne in 1917, which led to her meeting the love of her life: Adrienne Monnier.

Adrienne ran a bookstore called La Maison des Amis des Livres, which doubled as the first lending library in all of France. As Andrea Weiss recalled, Adrienne “transformed book selling into an intellectual and artistic profession” by encouraging visitors to spend time in her bookshop and adorning her walls with photographs and art.

Inspired and encouraged by Adrienne, Sylvia chose to open her own bookstore in 1919: Shakespeare and Company.  Her timing was excellent; the 1920s were a rollicking time of literary exploration and experimentation in Paris, which writers such as T S Elliot, James Joyce, F Scott Fitzgerald, Ezra Pound, Gertrude Stein, and, of course, Ernest Hemingway called home. She welcomed these writers with open arms. Hemingway remembered her fondly, saying that “no one I ever met was nicer to me”. She was willing to loan money to, receive mail for, and even provide housing to writers who were down on their luck. Her passion for James Joyce’s writing even led her to single-handedly – and at great personal cost – publish Ulysses when nobody else would. Sylvia’s devotion to these emerging writers directly influenced a whole generation of great American authors, and her legacy lives on in their works.