A note about the author from our dramaturg

As a dramaturg, the forces and elements that shape a work’s creation fascinate me. Like the geological forces that have shaped the earth’s landscape and topography, there’s a story behind every story. Even with a work of fantasy fiction, where an imaginary world of magic is conjured up, there’s still the underlying influence of reality. 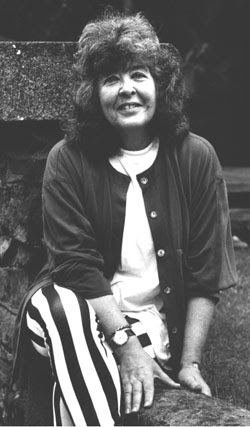 Having grown up in England during World War II, Diana Wynne Jones felt the heavy impact of reality. In articles and interviews, she stated: “I think I write the kind of books I do because the world suddenly went mad when I was five years old.” As the eldest of three girls that were often ignored by their distracted parents, she dutifully cared for her two younger sisters when the family was suddenly transplanted from familiar surroundings several times. From this peculiar childhood, she developed a lively imagination and a delightful sense of humor.

When it came time to go to university, Jones studied at Oxford during the first half of the 1950s, where she attended lectures by C.S. Lewis and J.R.R. Tolkien. Despite the fact that writing fantasy fiction was frowned upon by the serious academic institution, she managed to learn a great deal from the two men. Their influence on her work is not obvious, however, as she developed a thoroughly unique style.

However, at the beginning of her career in the early 1970s, it wasn’t considered respectable for a woman to write fantasy books for children. This gradually changed and the impact of feminism on fiction can be seen during the 1980s, as a female protagonist began to become more acceptable. Despite this, Jones was regularly faced with the casual dismissal of male reviewers and often asked: “why don’t you write Real Books?” Rich with the implication that “real” or worthwhile literature must be concerned with serious modern issues, like racism or immigration, this question would not have been asked of her male colleagues.

Her books don’t engage in serious discussions of current problems because Jones believed a good book should not be a reproduction of ordinary life, but instead should provide a marvelous experience. She understood the value of examining a problem from a distance created by magic and wanted to give readers a chance to use their imagination. As she explained it: “Imagination doesn’t mean just making things up. It means thinking things through, solving them, or hoping to do so, and being just distant enough to be able to laugh at things that are normally painful.”  In addition to the imaginative aspects of her work, she wrote complex, multilayered plots with strong intellectual underpinnings, including the timeless principles found in mythology.

In a career shaped by life experiences and spanning over four decades, Diana Wynne Jones wrote over forty books for young children, older children, and adults. She died in 2011 after a two-year battle with lung cancer. Highly regarded by both fans and fellow authors, including her good friend Neil Gaiman, Jones is treasured for her singular style and astonishing imagination.  Following the Harry Potter phenomenon of the late 1990s, a resurgence in the popularity of her work occurred, as her novels were found to have a similar appeal. While she never attained the commercial success or widespread fame of J.K. Rowling, her work helped to pave the way for female fantasy authors. –Andrea Kovich, dramaturg for Howl’s Moving Castle.