In Book-It’s current adaptation of Emma, Emma Woodhouse spends much of her time plotting matches for her friends and neighbors. But what does Emma do when she is not strategizing over which of her acquaintances should marry one another?

During the Regency Era, women from the upper class did not have jobs and therefore found themselves having a great amount of free time which they occupied with a variety of activities. Honing their accomplishments was one such acceptable past time. Women practiced playing musical instruments, learning the romantic languages, drawing or painting, gracefully dancing, and mastering needlework. Reading novels also had become a popular pastime during Regency England as well as participating in philanthropic work such as fundraising for a church or school, or visiting those less fortunate with gifts of food and warm advice.

Here are some examples of the stylish needlework that Emma and her crew would have done!

Netting is an old skill, which can be dated back to the early Egyptians. Either a wooden or bone gauge is used to keep mesh even as yarn, cotton, or silk thread is wound onto a netting needle to create knots which form a mesh fabric. The knots can be tied into patterns, or the mesh can be embroidered over in order to create filet lace. In our adaptation, Emma Woodhouse practices this craft while Miss and Mrs. Bates pay her call.

Knotting is used to create a decorative trim or fringe from a series of knots, using cotton or silk which is wound onto an oval shaped shuttle. The trim created is then sewed onto a fabric used to upholster furniture, or make curtains.

For a closer look at knotting visit here.

Crochet work evolved from tambour work, which involves stretching fabric tightly over a hoop and using a long hook to draw fine thread through the fabric. Tambour work was often used to make a decorative design for a ball gown.

The chain stitch is the basic tambour stitch and can be seen here. 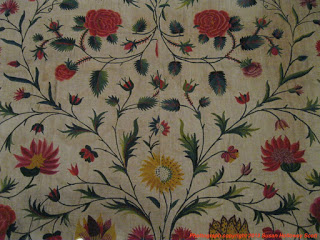 Embroidery had many uses during Jane Austen’s time.  The skill was used to embellish handkerchiefs, linens, veils, cuffs, collars, bonnets, tablecloths, day caps, etc. White embroidery on a muslin gown was quite common and women could keep their fashions new and varied through embroidering different designs onto the clothing.

Not only was embroidery a useful tool, but it was also a great pastime:  women could bring their embroidery with them while paying call to their friends and also while spending a quiet evening with their families.

A popular source for embroidery patterns during the regency era was The Repository of arts, literature, commerce, manufactures, fashions and politics by Rudolph Ackermann, published in volumes from 1809-1828 (Which can be found here). Published within are numerous embroidery patterns, which women would share with one another while paying call.

For a few tips and guides on how to embroider visit dmc-usa.com for a crash course on embroidery. 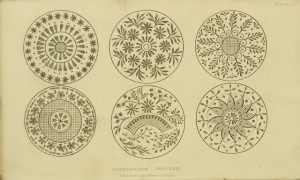 In an attempt to actively engage audience members with Emma, Book-It recently hosted Stitch & Bitch- a pre-show embroidery class. Leslie Witkamp, Book-It’s Development Associate and embroidery extraordinaire, helped to teach the stitches and practical elements of embroidery. Director of Marketing & Communications Patricia Britton touched on the importance and prominence of embroidery during the Regency Era.

Stitch & Bitch was a fun experience for the attendees. While receiving only two RSVPs (both knitters), many people showed up to participate, or were drawn in by the community atmosphere upon arriving to the Center Theatre. It was such a hit that we ran out of embroidery hoops! The audience was excited to learn a new skill, or to revisit a skill for those who had learned embroidery as a child. Stitch & Bitch was not restricted to embroidery. Others brought their knitting, needle point, and petit point as well.

What was striking about Stitch & Bitch was how it demonstrated not only the practical uses of embroidery, but also the social aspect of needle work. During the Regency Era women embroidered while paying call with their friends or while attempting to charm those belonging to a class higher than their own. During Stitch & Bitch , the participants also began speaking to one another and made strong connections to others as they worked.

Embroidery is not a lost art stuck in the Regency Era. “Inappropriate” embroidery has become quite popular, which appeals to younger generations as well as older generations. For example, Leslie Witkamp showed off her embroidery creation which read “Go to class. Do your homework. Get a fu*king education” and a participant responded “I need to make that for my granddaughter!”

Embroidery remains a popular pastime and Book-It was much obliged to introduce and reintroduce it to its audience base. Make sure to catch Book-It’s production of Emma while you still can to see what all the fuss is about!  Emma runs through January 3rd. You can purchase your tickets here, or call the box office Tuesday-Friday 12:00 – 5:00pm at 206.216.0833