Sex and Sexuality in Paris 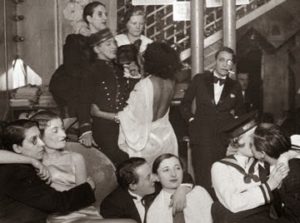 France had decriminalized homosexuality in 1791, which made Paris (along with Berlin) a sort of mecca for homosexuals, particularly lesbians. Open lesbians, such as the legendary Natalie Clifford Barney, served as examples for homosexuals who were forced to hide their sexuality in other parts of the world. According to historian James Baxter, “those who moved to Paris found a thriving gay culture, including many literary and artistic women who, while more discreet than Barney, lived openly as lesbians or, like the novelist Colette, made no secret of their bisexuality.” Our story includes members of two famous Parisian lesbian couples: Alice B. Toklas and Gertrude Stein, and Sylvia Beach and Adrienne Monnier. The acceptability of homosexuality and the thriving gay subculture only added to the tourist draw of the “naughtiness” of Paris.

At the same time, homosexuality, particularly lesbianism, was so normalized that it was often basically overlooked by the time Hemingway arrived. As historian Michael Reynolds argues, “Lesbian relationships quickly became, for Hemingway, an interesting part of his Paris life. Arriving, as he did, a generation too late to participate in the pre-war revolution in the arts, Hemingway missed the gaudiest period of lesbians in Paris. By 1922, strong and lasting lesbian relationships were woven permanently into the social fabric of the Left Bank. Loving couples like Gertrude and Alice, Sylvia Beach and Adrienne Monnier, Djuna Barnes and Thelma Wood were neither ostentatious nor threatening; except for their sexual choice of partner, these relationships were modeled on and mirrored the heterosexual world. Only Natalie Barney, long past the dazzling beauty of her youth, continued to make a public issue of her sexual preference.” Although Hemingway’s fiction shows his arousal at the thought of two women in love, homosexuality became a normal part of his everyday Paris life.