The Early Life of Ezra Pound 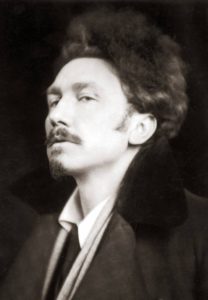 Perhaps my favorite one-line description of Pound comes from historian Michael Reynolds, who described him as “literary talent scout, carpenter, self-taught musician, writer of poems and midwife to the new age”. Ezra Pound was born October 30, 1885 in the tiny town of Hailey, Idaho. Pound knew at an early age that he was going to be a poet, and at age 15 he announced this intention to his parents. He went on to pursue higher education, attaining his bachelor’s degree in philosophy from Hamilton College in Clinton, New York. This led to a teaching job at Wabash College in Indiana, but the formality of higher education grated on him, and in 1908 he set sail for Europe with just $80 in his pocket.

Although his initial arrival in Venice did not generate in an instantaneous literary following, Pound kept at his craft. His move to London later that year proved fruitful, as he befriended two massively influential writers: Ford Madox Ford, publisher of the Transatlantic Review, and William Butler Yeats. With their encouragement, Pound published three books over the course of the next year, which were all well received. His longed-for literary success had finally arrived.

In addition to his poetry, Pound worked tirelessly as a critic and talent scout. The lineup of writers Pound personally promoted is impressive: D H Lawrence, Robert Frost, T S Eliot, James Joyce, and, later, Ernest Hemingway himself. Known as a kind and generous man, Pound was also quick to give his support and even loan his money to those he believed showed promise. He also never lost his sense of adventure and desire for further experience. In late 1920, after 12 years living in London, Pound abandoned England for a new start in Paris, where we find him at the start of our play.