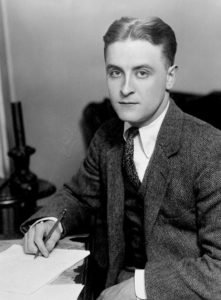 Francis Scott Key Fitzgerald was born on September 24, 1896 in St. Paul, Minnesota. His full name comes from his second cousin three times removed (on his father’s side), Francis Scott Key, famous for writing the lyrics to “The Star-Spangled Banner.”

Like many authors, Scott began writing at an early age, a detective story he wrote was published in his school’s newspaper when he was just 13. From then on, his career was set. His parents sent him to the prestigious Newman School in New Jersey, and from there he moved on to Princeton University. However, he was so busy writing that he didn’t seem to have time to study; he was placed on academic probation and dropped out to join the Army in 1917. He hastily wrote his first novel, The Romantic Egotist, before reporting for duty because he was afraid of dying at war without ever writing a novel. But, luck was on his side! Though the novel was rejected by publishers, the war ended before Scott could even be deployed.

However, the Army did give him a significant gift: his wife, Zelda, whom he met while assigned to Camp Sheridan outside of Montgomery. Ala. She was entertaining several suitors, so in order to prove his ability to provide, he rewrote and published his novel under the title This Side of Paradise. The novel was published to glowing reviews, and Zelda married him just a week later.

Zelda and Scott became overnight celebrities, not only for Scott’s literary notoriety, but because of their extravagant lifestyle and penchant for wild parties. Between benders, Scott managed to continue supporting his family by writing stories for popular magazines like The Saturday Evening Post and Esquire. He also wrote his second novel, The Beautiful and Damned, which cemented his status as a chronicler of the jazz age. He famously wrote, “It was an age of miracles, it was an age of art, it was an age of excess, and it was an age of satire.”

Seeking a change of scenery to spark his creativity, in 1924, Fitzgerald moved to France, and it was there, in Valescure, that Fitzgerald wrote what would be credited as his greatest novel, The Great Gatsby.